Stars are separated into many levels of various sizes, and each is called a constellation. By connecting these stars, many different images are created in the shape of objects or animals. Because of each different shape, astrologers named the constellations specifically. According to the International Astronomical Union, there are 88 constellations in the sky. From the Earth, the astrologer observe the Sun, the Moon, and other planets’ movements to determine a large circle for a certain year. It’s called ecliptic. And the ecliptic is separated into 12 different portions which are named after the closest constellations. 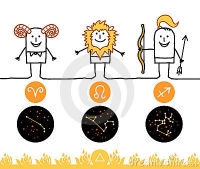 Anyone who believes in Western Astrology signs plays a huge attention to their compatibility which is indicated by the sign of the Zodiac and their date of birth. There are 12 Western Zodiac signs, including Aries, Taurus, Gemini, Cancer, Leo, Virgo, Libra, Scorpio, Sagittarius, Capricorn, Aquarius, and Pisces. When studying the Western Astrology, we enable to recognize that characteristics (good and bad points) of a person who was born under this sign or determine whether two people are compatible or not.

Look at the Western Astrology Compatibility Chart to consult about the 4 main elements in the Zodiac signs! As you know, the 12 signs are divided into 4 major groups, consisting of Water, Fire, Earth, and Air. If mentioning each sign in each group, we are able to discover their certain characteristics.

This group includes Pisces, Cancer, and Scorpio. Anyone who was born under the Water element is quite impressionable, instinctive, and complicated. In addition, they are known as people who own a great sentimental depth. These individuals love enjoying a family life as well as a secured life. Furthermore, they often carry out according to their heart.

Aries, Leo, and Sagittarius belong to the Fire element. They’re known as passionate, determined, and keen people. Although they might spark into action with ease, they’re often prone to become instinctive. Those always have a positive attitude in order gain whatever they want in life.

The Earth element consists of Taurus, Virgo, and Capricorn. They’re good at examining any situation thanks to their logical and rational thought. These people often have a restricted outlook on life.

Gemini, Libra, and Aquarius will be conditional on the Air element. They’re considered as the best communicators. Moreover, they’re rather generous and polite, so that’s the reason why the others often call them “people of people”.

In case that you want to supplement more details about this post “Western Astrology Compatibility”, don’t be reluctant to send your inquiries in the box below and then receive our answers in the soonest time.

Is Astrological Compatibility In Marriage A Passion Fruit?

Compatibility in marriage is like the elusive passion fruit – while everyone yearns for it, only a few are able to derive ultimate pleasure from having acquired it. Astrological compatibility is aimed towards preparing you to accept the worst aspects in your relationship while capitalizing on the best. That said, a strong recommendation would be […]

Among the 12 signs of the Zodiac, Pisces is the last sign that is highly linked to emotion and sensitivity. It is vastly concurred that the Pisces individuals are likely to work as the so-called artists and spiritualists who care for the others’ pains in life. Provided that your interest is about the Pisces Astrology […]

In the old days, astrologers have dedicated all their life to study the association between planets’ positions to events on the Earth and distributed guidelines to all kinds of development from field works to fortune-telling ones. Learn More About Astrological Signs Compatibility The birth of Astrology Compatibility Chart is considered as an answer to the […]

The astrological sign can give us great insights into our present living as well as the talents and inborn qualities we possess. You can explore a great deal of information about yourself through reading your Zodiac sign. What is your Zodiac sign? Read the article below to find answers. Star Sign Traits Aries (March 21 […]