Astrology and zodiac signs are able to fascinate everyone around the world. Even the critics and skeptics may find themselves curious to research zodiac signs and symbols in order to stack up their disagreements against them. Thus, don’t hesitate to consult this article since it will help them to summarize the astrology symbols and meanings. Let’s start our journey in digging deep into the 12 Zodiac symbols now! 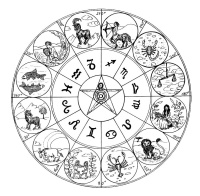 Generally speaking, all of the Zodiac symbols possess different significances, and they are not merely arbitrary glyphs offering a brief representation. Hence, the more we understand about the symbols and significances, the more intrigued we might be about the entire system of astrology and horoscope. Don’t be reluctant to spend time in taking a look at Zodiac signs and their symbols below!

Aries – The Ram
Actually, this symbol tends to be easier to realize than others as it truly is similar to the ram’s horns. An exciting fact corresponding with this sign’s symbol meaning is that Aries people are often apt to head injuries at different stages of their life cycles.

Taurus – The Bull
This symbol will resemble the bull’s horns and head. Interestingly, most of the Taureans are born chubby and rounded or have the soft and chubby appearance when they grow older.

Gemini – The Twins
2 lines joined together will indicate the symbol of Gemini – The Twins. Actually, we are easily able to identify a Gemini in the crowd. If we see an individual who has the most conflicting of words and actions, which can change every 2 seconds, like the weather on Mercury, we have caught a Gemini.

Cancer – The Crab
Someone considers Cancer’s glyph as symbolizing breasts that demonstrate the Cancer’s nurturing quality. Normally, Cancer is a strong feminine sign since everything Cancerians express is very emotional, expressive, sensitive and nurturing.

Leo – The Lion
Typically, Leo’s glyph might represent the 2 valves of the heart as Leo tends to rule the heart. Alternatively, it could be known as the lion’s mane. There is one thing that a Leo can not do or conquer: keep her/his hair down and tamed. We shall find locks of hair leaping out of her/his restrictions and showing off her/his freedom, regardless of all odds.

Virgo – The Virgin
The Virgin symbol is similar to that of Scorpio, except one thing: it tends to curl up into itself, instead of the tail pointing outward. Virgo people are usually critical of obsession relating to their weight, eating habits, overall health, and physical appearance.

Libra – The Scales
This glyph is able to imply the scales for weighing or setting sun. It is really easy to recognize a Libra in our friend circle. We are advised to pick up a fight with anyone, and then check the one who lends her ears to the argument first. Yes, she is a Libra.

Scorpio – The Scorpion
As mentioned above, this symbol tends to be similar to that of Virgo, except one point: its “tail” will point outward. Scorpio members are so seriously finding information that sometimes, they may eventually stoop to eavesdropping on the gossipers.

Sagittarius – The Archer
To be described as a simple-to-remember symbol, Archer resembles the arrow.

Capricorn – The Goat
Maybe known as the oddest looking of the group, this symbol might be considered as the twisted horns of the goat. Believe it or not, Capricorns are the people who always appear younger than their true ages.

Aquarius – The Water Bearer
This glyph is similar to the waves in the ocean that make it easy to associate with the Water Bearer.

Pisces – The Fishes
Two fishes joined together will represent the symbol of Pisces – the Fishes.

For more information of the title “Astrology Symbols“, please type your concerns in the available box here as we’re glad to give you a hand!

Astrology is the study of positions and movements of the planets, sun, and moon to predict the future. People use Astrology Daily to discover their hidden talents and some important events that will take place in their life. Everything you need when using this divination method is your birthday. Look for your Zodiac sign from […]

Each of us wants to find out if we and the love interests can make the real soul mates, best friends or just a recipe for disaster. The Astrological Signs Compatibility is what we need to solve the puzzles regarding the love compatibility of the twelve zodiac signs. In Astrology, there stand four elements: Fire, […]

Much like the crab that symbolizes them, Cancer-bearers tend to possess a proverbial shell themselves. They are prone to crawling into it and protect themselves if they feel threatened because they are one of the most emotional and highly sensitive signs of the entire Zodiac. They also have a tendency toward moodiness; they can be […]

Stars are separated into many levels of various sizes, and each is called a constellation. By connecting these stars, many different images are created in the shape of objects or animals. Because of each different shape, astrologers named the constellations specifically. According to the International Astronomical Union, there are 88 constellations in the sky. From […]

Astrology Birth Chart will show your horoscope sign as well as the characteristics of your personal sign. Look at the chart, use your birthdate to figure out your sign. By being aware of the knowledge of horoscope sign, you will be more successful in life. It helps you work effectively with your own self and […]